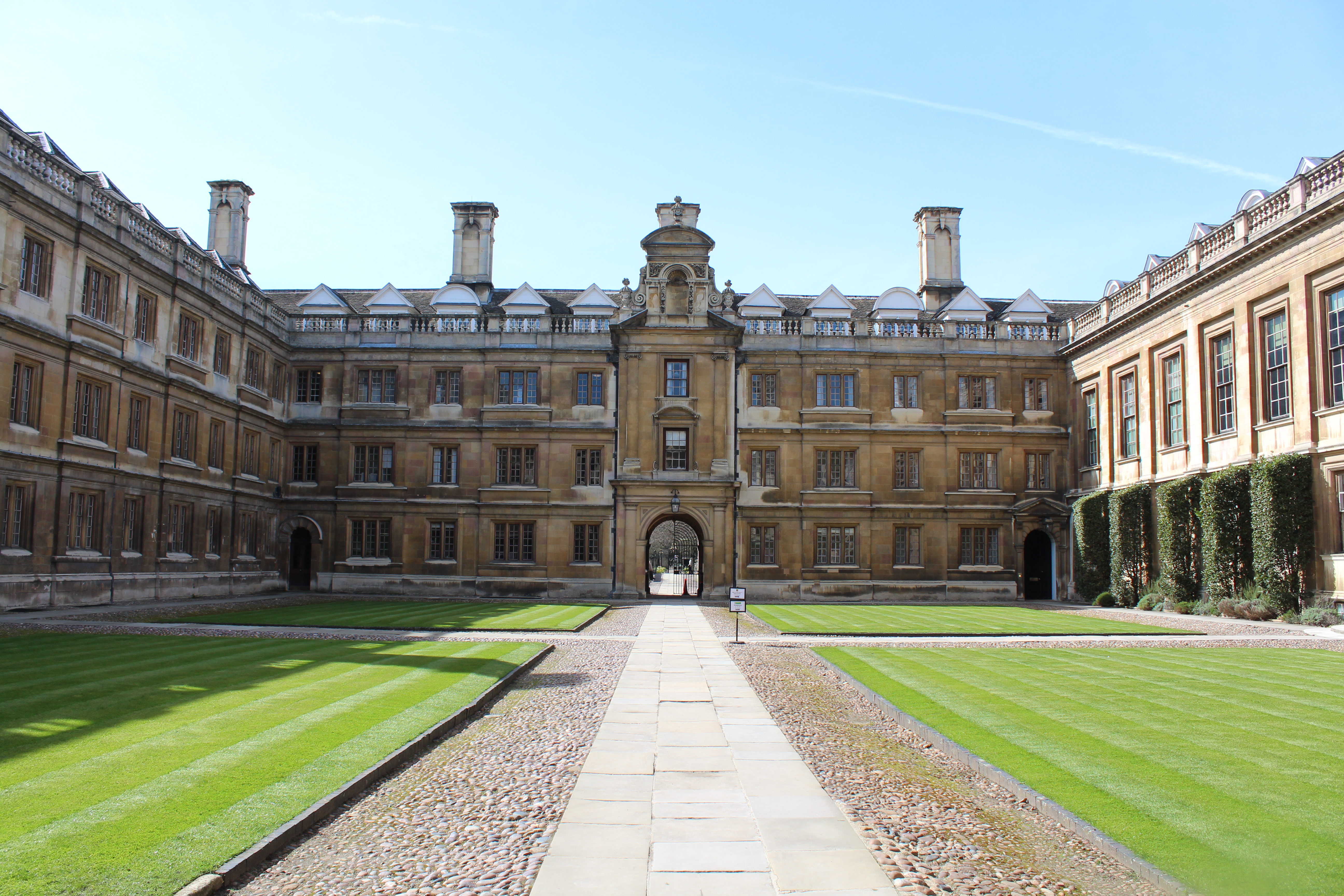 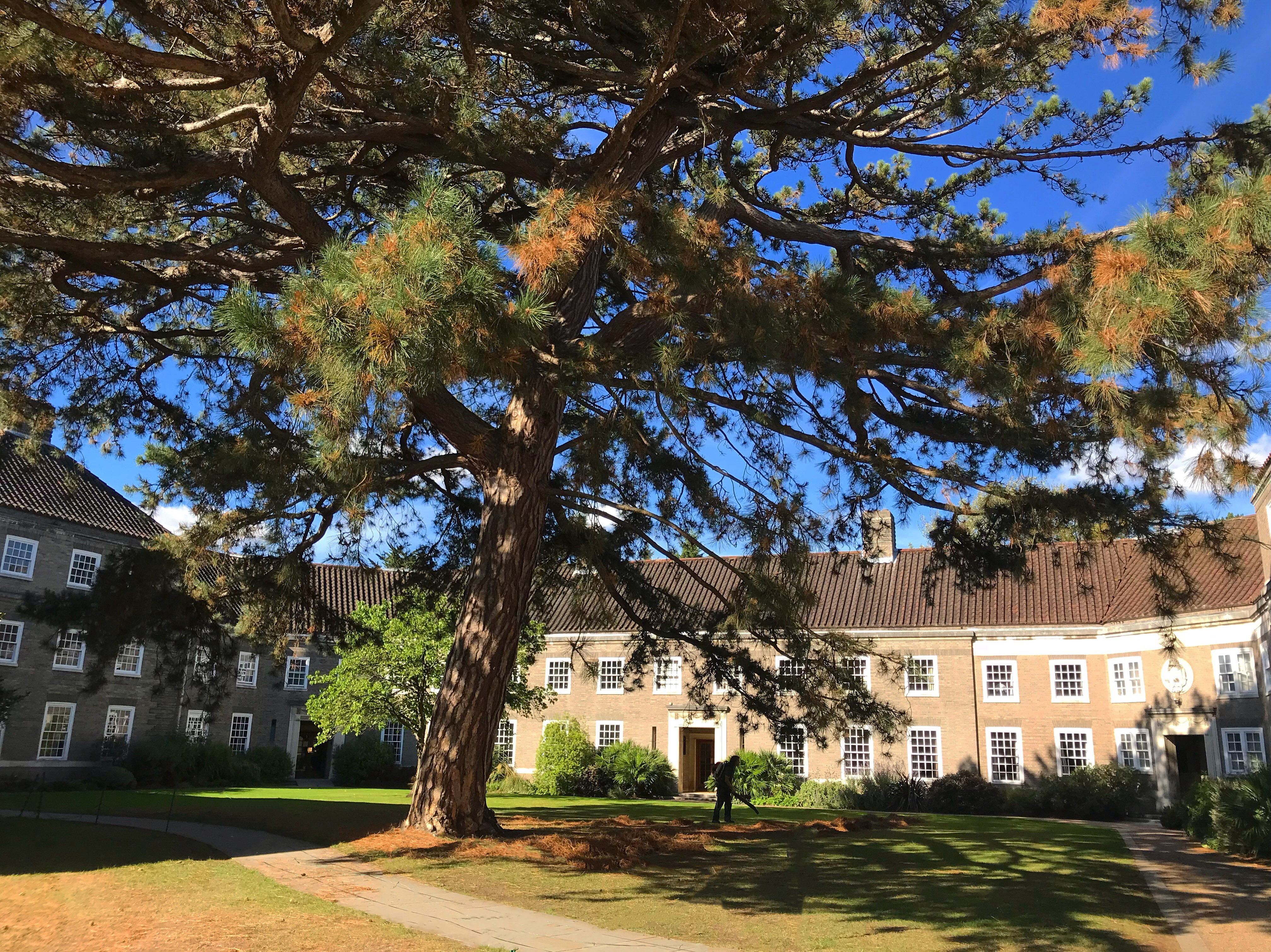 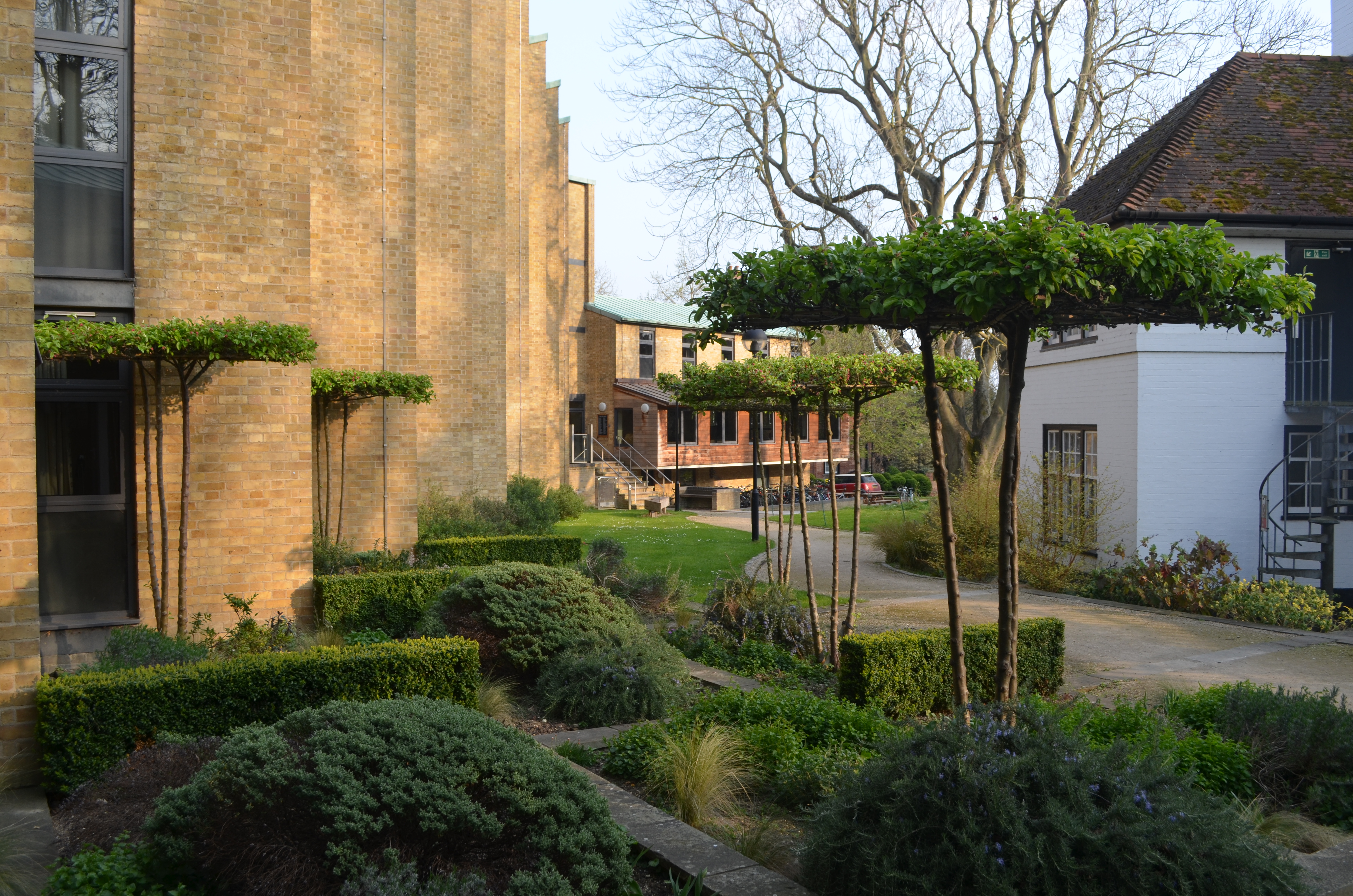 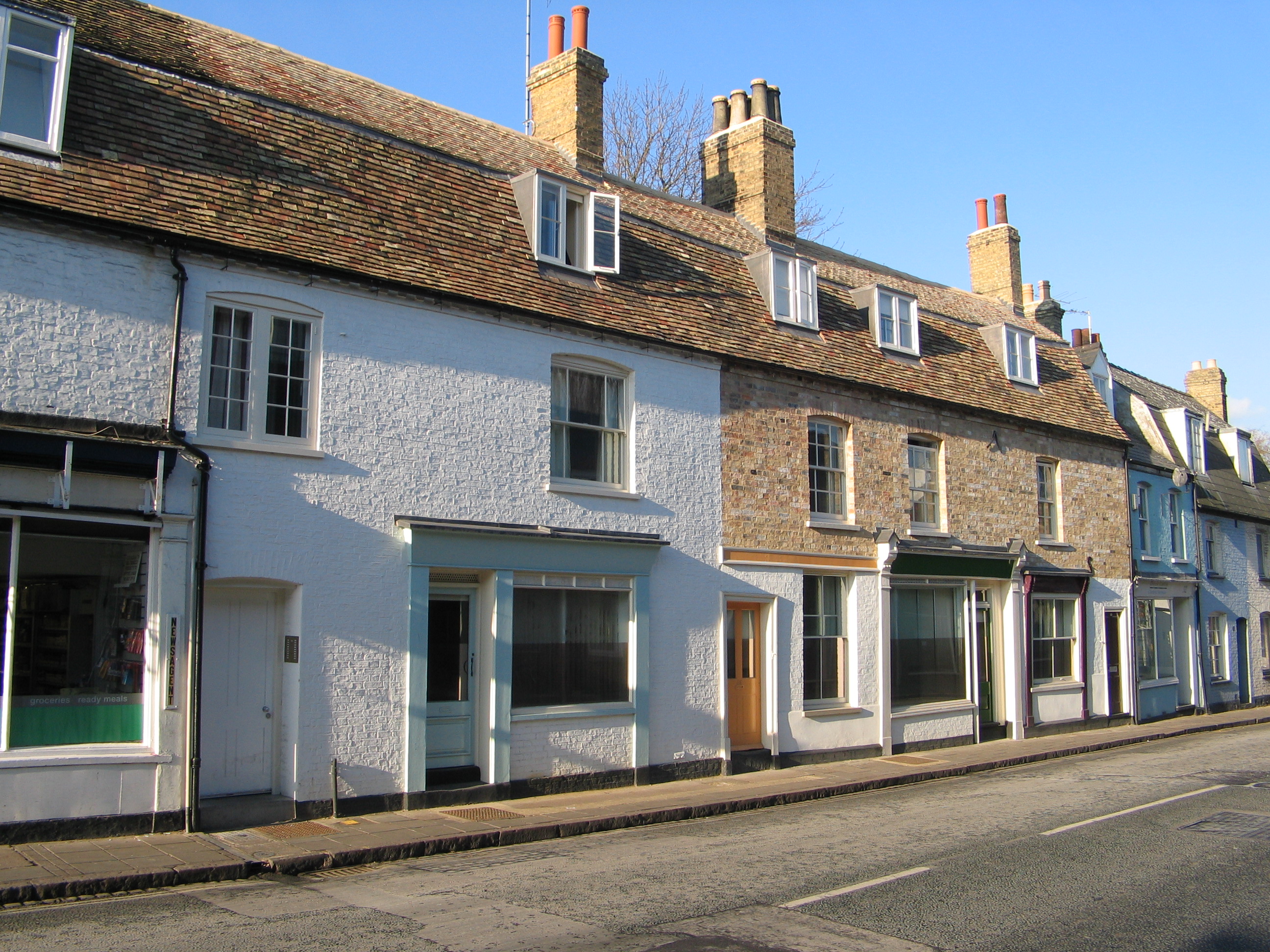 At Clare's centre is the elegant Old Court, which contains the Great Hall and the Buttery as well as Common Rooms for graduate and undergraduate students.  It is unique among the Cambridge Colleges founded before 1800 in having maintained its architectural integrity and resistance to later accretions. Apart from an early nineteenth-century facelift, which enlarged the windows and introduced a few touches of Regency taste, it has remained true to its seventeenth-century self.  Old Court is an exquisite small example of the traditional Cambridge court, enclosed on all four sides and open to the sky.

Set back from Trinity Lane, the small entrance forecourt is fronted by gateposts carved in 1673 and Warren's iron gates, dating 1713-15.  The heart of the College, Old Court houses the Chapel, Hall, Master’s Lodge, the Buttery, the combination rooms, the Admissions, Bursary, and Tutorial administrative offices as well as a number of Fellows rooms and student accommodation.

Cross the river over the stone footbridge and you come to Memorial Court home to the Library and Lerner Court. Castle Court, where many second-year students live, is about 10 minutes walk away.

Old Court is currently undergoing a transformation which will see a new River Room cafe situated on the bank of the river, to be opened in 2023. This transformation will also increase Old Court's accessibility and energy efficiency. More information about this can be found below.

After the First World War, Clare’s rapid expansion necessitated new buildings. A new court was constructed on the other side of the Cam and Queen’s Road, on land which had been acquired in the nineteenth century. The new court, designed by the architect Sir Giles Scott, was conceived specifically as a memorial to the Clare men who had lost their lives in the First World War. The monumental memorial arch which forms the entrance to the court is pierced to accommodate a large bell and carries the names of the Clare men who died in both twentieth-century world wars.

Memorial Court was extended in the 1950s when Thirkill Court, named after Clare’s distinguished Master from 1939 to 1957, Sir Henry Thirkill, was constructed.  The building of the College’s new Forbes Mellon Library, boldly placed in the centre of Memorial Court effectively divided the court into two, with the halves linked via passages to the left and the right of the bulk of the building. A separate court has therefore been created to the west; this was named Ashby Court in honour of Lord Ashby, Master from 1958 to 1975.

Constructed on the last pocket of land available on the original Memorial Court site, Lerner Court was constructed in 2008. Remaining sympathetic to Sir Giles Gilbert Scott’s architectural vocabulary as expressed in Memorial Court, the new buildings use the same materials and echo its volume and proportions. The court combines two main functions: an accommodation wing and a state-of-the-art study centre which includes an underground 150-seater auditorium, a spacious, light-filled, double aspect foyer with a portico terrace extending into the court and a double height music/conference room.

The space created by the new buildings is as important as the buildings themselves. Lerner Court – named for Randolph Lerner, an alumnus and major benefactor of the College – does not simply replicate other courts, but aims to be a dynamic, landscaped space, laid out by the distinguished landscape architect, Robert Myers.

Set at the bottom of Castle Mound, Castle Court, is situated between Castle Street and Chesterton Lane. The first part of the estate was acquired in 1392 and, following the purchase of Castle End Farm in 1466 together with the gift of a third property from the Master of St Catherine’s, the estate was completed at the end of the fifteenth century. Castle Court houses the majestic Castlebrae, formerly the home the Rev’d Samuel Lewis and his famous wife, Agnes. When Agnes died in 1926, Castlebrae reverted to Clare and was converted into student lodgings. Two further houses were added, Braeside and Ethelreda, followed by the additions of Castle End and Castle House in the 50s and 80s respectively. Castle End received a major refurbishment in 2008 and there are plans to refurbish other buildings in the near future.

Clare Court is one of the College's postgraduate accommodation sites, located in Newnham Road. The site consists of a mix of refurbished, historic workmen's cottages and purpose-built graduate housing, centred around a tranquil interior court.

The St Regis site on Chesterton Road has been providing postgraduate accommodation for Clare's students for over fifty years. The original late-1930s buildings were acquired by the College in the 1960s, but in recent years the need for renovation of the site became clear.

Beginning in 2018, Clare’s Buildings Department oversaw the construction of three new purpose-built accommodation blocks. The front and centre blocks, along with the refurbished 108 Chesterton Road adjacent to the site, consist of 61 student rooms (including 2 accessible DDA rooms) and 24 studio and 1-bedroom apartments. The work was completed in 2020, with students taking up residence in January 2021.

On the front façade of the block facing Chesterton Road, the College commissioned a carving featuring swifts in flight, inspired by the swifts that were in residence in the original St Regis buildings. Swift boxes have been reinstated on the new site to provide a residence for these beautiful birds.