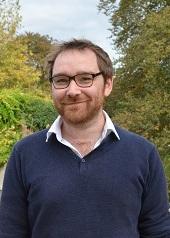 I mostly teach early modern literature, but I have a particular interest in drama — whether written in the early modern period or well outside it. For the last few years my research has considered the non-verbal aspects of dramatic performance and how they were translated into early modern print: a very grand way of saying I have spent a lot of time studying punctuation marks. But these interests have expanded to think more widely about the many ways in which we read the not-words of dramatic performance, considering in particular the methods by which playwrights explore and exploit the physicality of their actors. I am working on two books arising from this research: one, Punctuation and Personality in Early Modern Literature, will be published by Palgrave Macmillan, and the other, Shakespeare for Snowflakes: Slapstick and Sympathy, will be published by Zero Books.

The Shakespeare for Snowflakes book builds on some lectures given at the Cambridge English Faculty, which examined instances where dramatists presented traumatic experience in cruelly slapstick ways. The book reflects on the reasons I attached content warnings to these lectures, and analyses the representation of the lectures and their warnings in subsequent media coverage and online commentary. (An early article responding to that coverage can be found here: As well as slapstick and tragedy I have lectured on The Actor’s Body On Stage and In Print; Sex in Early Modern Literature; and Making Shakespeare’s Sonnets.

Prior to my work here in Cambridge I was based at the University of Bristol, where I taught extensively for the full-time BA in English and for the part-time BA in English Literature and Community Engagement (ELCE). As well as assisting the ELCE director in running the programme, I was the director of our short course and public outreach programmes; in this role I put together a range of courses which were designed to encourage members of the public into (or back into) full-time or part-time study. To this end I also collaborated with a community group called Babbasa Youth Empowerment (http://babbasa.com) to set up a summer course in ‘Migration Literature and the Media’; I introduced tutors to community activists, working with them and a student body drawn from the local area to develop and share creative responses to African and Afrodiasporic short stories.

Some years before my hairline started receding I studied at Clare as an undergraduate myself. When I applied here I was the first person in my family to apply to university, and I was the first person in my school to apply to Oxbridge. If you are reading this and you would like to apply to Cambridge then you should apply to Cambridge. I have found that what’s most prized here is intellectual curiosity — and whoever you are and wherever you’re from, if you’re intellectually curious then you will be welcome here. While at Bristol I won a University Teaching Award, and among the student feedback collated by the judging panel one comment stood out: 'Ian reminds us that we’re all teachers and we’re all students, and we should all keep an open mind to learning from each other'. This is something I learned at Clare, and it’s something I try to put into practice myself now I’m a supervisor.